Bulldogs Official Sponsor
The Shelbyville Semistate consisted of 20 teams and 40 individuals from four other regionals, which translates to a field of approximately 180 runners.
“I cannot remember a more miserable running conditions for a cross country tournament than Saturday morning was, ” BHS head coach Lisa Gausman commented.  “What a wet, cold and windy morning.”
The Batesville Bulldog cross country teams put on their mental toughness and ran through it. In fact, BHS had one runner make the All-Semi State team, two advance to the state meet and two run a personal best, according to Gausman.
Senior Adam Moster placed 20th and was named to the All-Semi State team. Moster ran a personal best time of 16:11.  The first 10 individuals not on one of the top 6 teams advancing get to move on as an individual and Moster was 9th.
On the girls side, sophomore, Lily Pinckley placed 23rd overall, just missing the 20th spot, but was the 10th individual not on an advancing team show she will advance to state next weekend.
Overall the boys placed 12th as a team, one spot better than they were seeded. Senior Joshua Myers came in next at 43rd and running a personal best time of 16:36. He was closely followed by Ean Loichinger in 50th (16:40).  Also running for the Bulldogs were Benjamin Moster (94th), Daren Smith (157), Dillon Murray (164) and Nathan Villani (167).
The girls finished 11th overall, which was right where they were seeded. In addition to Pinckley, Ava Hanson came in next at 70th (20:27), followed by Maria Lopez in (80), senior Liz Loichinger (100th). The final three came in one right after another, Madison Rahschulte, Sophie Myers and Trysta Vierling (111, 113, 114).
Moster and Pinckley will compete on Saturday at the LaVerne Gibson Course in Terre Haute.  The boys race is scheduled for 1 p.m. with the girls to follow at 1:45 p.m. 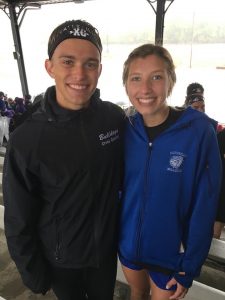 Varsity Wrestling vs. Indiana School For The Deaf

Indiana School for the Deaf
6:00 pm
View All Events