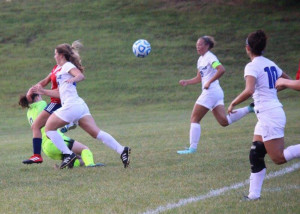 The Batesville Lady Bulldogs improved to 6-0 on the season after a 4-3 victory on Tuesday night against the visiting South Dearborn Lady Knights. After a back and forth first half the Lady Bulldogs were able to notch the first goal of the match.

“Taylor Rowlett made a great effort to get around two defenders and passed the ball to Carlie Werner. Werner made a great turn and struck a hard and low shot just inside the near post for the score,” commented coach Kyle Laker.

Batesville would go up 2-0 after a score from Rowlett, just two minutes later. Gabi Garcia played a ball into Rowlett’s feet, but Rowlett allowed it to roll past the defender before touching it around her and finishing a left-footed shot into the back of the net. In the last minute of the half, goalkeeper Molly Wintz made a great save to keep the score 2-0 at halftime.

The second half was very similar to the first half.

For the first 30 minutes, the game was play back and forth with neither team able to capitalize on their opportunities. South Dearborn was able to make it a 2-1 game with about 11 minutes to play in the match when Alyssa McClanahan found the back of the net after Wintz cleared the ball and McClanahan was able to 1-time the shot before Wintz could recover to goal. Just a minute later, the Lady Knights tied the game on another score from McClanahan. This time, it was a nice build up from the Lady Knights as they found McClanahan open behind the Batesville defense for a nice driven shot into the back of the net.

Although there were several more chances for the Lady Bulldogs, the end of regulation ended with the score 2-2.

Since this was an EIAC matchup, the teams would play two 7-minute overtime periods to find a winner. Batesville would capitalize midway through the first period of OT. Garcia found Marigrace Anderson in the middle of the field and Anderson played a nice t-touch wall pass that led Garcia into space. Garcia attacked the ball and drove a shot from 30 yards out that tucked just under the crossbar for the score.

The Lady Knights werenât finished once again. They were determined to make the comeback and were able to even the score on a nice finish from Madison Fentress from 30 yards out that skipped on the wet grass past the goal keeper.

The second overtime period was just as eventful as the rest of the game.

This was a great game to watch as a fan as the teams battled back and forth. After a free kick by South Dearborn, Batesville was able to counter with a great penetrating pass from Garcia to Werner. Werner took a few touches before playing a through ball to a sprinting Rowlett behind the Lady Knight defense. Rowlett took a touch to her left to set up her second left-footed finish across the face of goal and into the side net for the game winner.